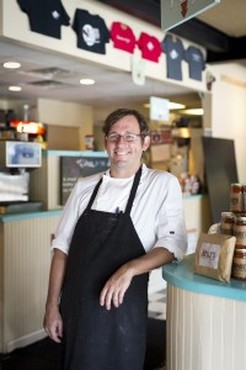 ​
Chris Stewart, Owner and Executive Chef
​
An eighth generation Alabama native, Chris Stewart knows a thing or two about true home grown southern cooking. Born and raised in Birmingham, he got most of his cooking knowledge firsthand from his grandmother Jennie Ruth Haley. Jennie Ruth was born on a farm in rural Mississippi before relocating to Birmingham. Her grandmother had a small “meat and three” restaurant in the city and it was there Jennie Ruth and her sisters learned how to cook. Jennie Ruth then married Calvin Stewart and they purchased a piece of land where they grew a substantial garden filled with southern staples like corn, butterbeans, green beans, okra, turnip greens, tomatoes, watermelon and more. It was this upbringing that allowed for Chris to understand the importance and the difference of using local, fresh produce. He learned how his grandmother made her signature dishes often during Sunday Supper—dishes like country fried steak, fried chicken, corn bread, deviled eggs, pies and cobblers. Items you often see at The Glass Onion.

Chris went to Auburn University for a stint and studied Hotel/Restaurant Management. During that time worked in some nearby restaurants. He worked at a deli and learned how to bake bread, and then at a small café that was serving fresh, local fish, made from scratch dishes, and hand-butchered steak. He worked his way up in the restaurant and became the leader in the kitchen. He eventually moved to Charleston where he attended Johnson & Wales University. He worked full time in the kitchen at Magnolias under the leadership of Executive Chef Donald Drake and sous chef Craig Diehl. Magnolias at that time, was the city’s most respected and revered fine dining establishment. After graduating, he worked six months cooking at the Caneel Bay Resort in St. John, Virgin Island.

Longing to get back to Charleston, he returned in 2004, and was hired to work in the kitchen at Slightly North of Broad under the helm of legendary chef Frank Lee. His time there taught him more about Lowcountry flavors, produce, and techniques. He also met his future wife Suzanne Kelly. He moved on to work at FIG, spending three years working for James Beard Foundation winner Chef Mike Lata and worked his way up to sous chef. He and fellow FIG cook Charles Vincent in talks while cooking, discussed potentially opening their own place. Together with Sarah O’Kelley, did just that in 2008 when they found the space that is now home to The Glass Onion. The rest is history.
The other two partners over time decided to go on to pursue other interests, and Chris and his wife are now the sole owners of the restaurant. 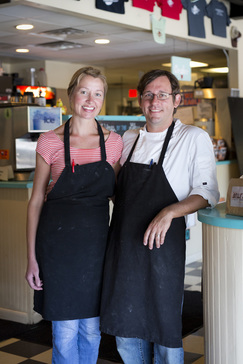 Suzanne Stewart, Head Baker and Consigliere
​
Suzanne Stewart grew up in southern New Jersey where she was surrounded by the area’s farmland. She gained a great appreciation and love for the land, something that has remained an important constant in her life. Her family eventually moved to the Lowcountry and she moved to Charleston in 1996 to attend the College of Charleston where she got a degree in English. After graduation, she was hired at Slightly North of Broad as a server and worked there for over three years. It was there where she really got into food and gained an immense knowledge about local produce, area foodways and more. It was also where she met Chris Stewart.
​
With this new love and appreciation for food, Suzanne began baking at home, something she used to do as a child. She went and worked at Cru Café and when their long-time baker retired, she began baking the restaurant’s popular orange creamsicle cake. This lead into a side business making custom cakes, called Flying Tricycle. She eventually left Cru but still makes the cake for the restaurant. About a year ago, she also joined a more active role at The Glass Onion where she makes all of the pastry served at the restaurant. In line with the restaurant’s philosophy, Suzanne uses mostly local and seasonal ingredients to create the popular line of desserts offered at the restaurant.